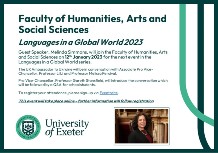 Languagges in a Global World 2023

Languages in a Global World 2023

The faculty of Humanities, Arts and Social Sciences is delighted to announce the next event in the Languages in a Global World series: Melinda Simmons in conversation with Professor Li Li and Professor Melissa Percival is scheduled to take place online, on Thursday 12th January 2023, 5.00pm – 6.00pm.

Professor Gareth Stansfield, Pro-Vice-Chancellor for the Faculty of Humanities, Arts and Social Sciences will introduce guest speaker, Exeter graduate and UK Ambassador to Ukraine, Melinda Simmons. Professor Li Li, Associate Pro-Vice-Chancellor for Global Engagement and Professor Melissa Percival, Professor of French, Art History and Visual Culture, will lead a conversation with Melinda to explore the key role her undergraduate degree in French and German has played in her career and her experience of the powerful skillset that comes with knowledge of a variety of languages. The conversation will be followed by a Q&A for school students.

The event will bring together our local foreign Modern Languages teachers and their students, Exeter Alumni, current staff and students of Languages, Cultures and Visual Studies at the University of Exeter.

To register your attendance, please visit the Eventbrite page. The event will take place virtually and registered attendees will receive joining instructions closer to the event. The deadline for registrations is: 17:00 Wednesday 4 January 2023.

We hope to see you there!

Melinda Simmons is currently serving as British Ambassador to Ukraine, where she has been posted since 2019. She has a BA degree in French and German from the University of Exeter and in addition speaks fluent Ukrainian, and has a decent understanding of modern Hebrew. She began her career in business and after studying at night school for an MA in European Politics, switched to work for an international NGO specialising in conflict prevention and resolution in fragile and conflict affected countries. She moved from there to the civil service and has worked for three government departments. She has previously been posted to South Africa. She is now based in Kyiv leading the UK’s support in country for Ukraine’s defence against the Russian invasion. 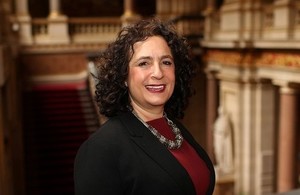