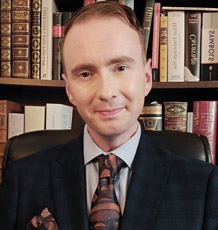 I have been part of the University of Exeter’s Department of Modern Languages and Cultures since 2017; first as a British Academy Postdoctoral Research Fellow and subsequently as a lecturer in French. I specialise in seventeenth-century French literature and history, with a particular interest in the intersections between literature and the law as well as the use of manuscript and archival sources. Before coming to Exeter, I taught at the Université Paris-Diderot / Paris VII (2010-11) and subsequently at the University of Nottingham (2011-17). At Nottingham I held the position of Honourary Visiting Research Fellow (2015-17) whilst also teaching French literature and history (fourteenth to twenty-first centuries), the compositional analysis of art works, French language, and translation.

My multi-award-winning research is mainly concerned with early modern texts and authors considered to be libertin – that is to say in some way unorthodox or subversive – and the history of these both within and beyond the field of literary criticism. I have published a number of studies that are broadly related to this central research interest. I work at an interdisciplinary level: exploring subversive thinkers and their texts from the perspectives of criminology, political history, and forensic linguistics, whilst also contributing literary analyses of legal texts and official documents to historical scholarship. These approaches are brought together in my recent book: Libertines and the Law: Subversive Authors and Criminal Justice in Early Seventeenth-Century France (Oxford: Oxford University Press, 2021, 432 pp.): https://global.oup.com/academic/product/libertines-and-the-law-9780197267004?cc=gb&lang=en  I serve on the Executive Committee of the Society for Early Modern French Studies (SEMFS) as Media officer: see http://www.semfs.org.uk/ ; and am also an affiliated scholar of the Danish National Research Foundation Centre for Privacy Studies (PRIVACY, University of Copenhagen).

I have won multiple awards and commendations for my teaching, which began at the Université de Paris VII Denis Diderot in 2010. I convene a first-year team-taught module exploring French history through works of art, a second-year early-modern theatre module, and a final-year module on seventeenth-century libertine literature, in addition to teaching French language at all undergraduate levels. I welcome supervision enquiries for prospective final-year dissertations, Master’s dissertations, or PhD supervision for projects within my historical period of interest.

2022: The Literary Encyclopedia Book Prize for literatures in languages other than English, (for my book Libertines and the Law (OUP: 2021)).

2021: The Sixteenth Century Society Literature Prize, for my work on notions of public and private spheres in manuscript poetry through the lens of François Maynard's corpus.

My recent book Libertines and the Law: Subversive Authors and Criminal Justice in Early Seventeenth-Century France (Oxford University Press) is the first to consider the criminal trials of three notorious libertine authors (Giulio Cesare Vanini, Jean Fontanier and Théophile de Viau) from the perspective of criminology rather than literary studies.

My research interests can be divided into two broad categories. First, the critical reception of subversive, unorthodox or ‘libertin’ texts in their day, with a particular focus on their treatment by the early modern French criminal justice system and, to a lesser extent, religious and literary polemicists. Second, the study of texts from the perspective of material bibliography; that is to say, the history of text as material and cultural object, and its various spaces of readership and dissemination. My research is characterised by a close attention to the relationship between texts and their cultural environment, whilst demonstrating the relevance of early modern texts to modern concerns pertaining to otherness, persecution and exclusion.

In 2022 I gave a public lecture on the Italian naturalist philosopher and 'libertine' Giulio-Cesare Vanini, at his home town of Taurisano. Television coverage of the event, which was hosted by the mayor, can be found at: https://www.youtube.com/watch?v=dFg39rgjrMg&t=145s

I serve on the committee for the Society for Early Modern French Studies (SEMFS) as Media and Publicity Officer (since 2017).

In 2019 I was awarded a European Network Fund as part of the University of Exeter's Global Strategy. This grant was used to establish research links with the University of Copenhagen's Centre for Privacy Studies by leading a delegation to the Centre's inaugural conference, and by hosting a workshop for delegates from the Centre in Exeter in the summer of 2019.

I have won multiple awards and commendations for my teaching, and currently convene three modules across all undergraduate levels. My teaching reflects my general interest in 17th-century French literature and history, and incorporates the latest findings from my research. I also teach French language at all undergraduate levels. I have received a number of 'Above and Beyond' awards for my teaching, and was nominated for 'Best Teacher / Academic' at the Students' Guild Teaching Awards in 2019 and 2021. I welcome supervision enquiries for prospective final-year dissertations, Master’s dissertations, or PhD supervision for projects within my historical period of interest.

"My favourite teacher at Exeter. Always energetic, eccentric and enthusiastic in class and brightens up everyone’s day. Has an incredible knowledge of French literature, theatre and philosophy."
"You truly are a captivating speaker. This has been my favourite module thus far in Exeter by far."
"The way Adam presents the content is engaging and charming, and learning his content felt more like reading a good book than studying for an exam."
"I found these seminars the most engaging of my entire year so far, and can only commend Adam for his lectures and teaching style."

This team-taught module has been designed to reflect my interdisciplinary approach to scholarship, and provides students with an overview of French history from the time of Joan of Arc through to the French period of decolonisation. Whereas lectures cover historical themes, events and figures, seminars are used to explore these themes through the compositional analysis of art works as well as literary texts.

"Among the best modules I have had the opportunity to take at university"
"By far my favourite. I enjoyed every bit of the lectures and seminars"
"This module was a joy and I wouldn’t change a thing"

This second-year module begins with a concise history of theatrical genres, spaces and audiences before studying plays by the three great playwrights of the age: Pierre Corneille, Molière and Jean Racine. The module's most recent cohort were unanimous in awarding this module module maximum marks for its organisation and overall running in anonymous online feedback.

"I would strongly recommend this to anyone looking for a module that is more engaging than most"
"The feedback given was better than any module I have ever done in the past"
"It is very motivating to have a professor who clearly is passionate about the course texts and who genuinely enjoys the teaching aspect of the job. It really does make a difference to the atmosphere"

In this research-led module I offer students an alternative to the polished and classical image of le grand siècle. The module covers the poetry of Théophle de Viau and François Maynard - on whom I have published a number of studies - as well as the Confessions of Jean-Jacques Bouchard and Molière's Dom Juan. This module is  supplemented by my archival and wider historical research on printing practices, material bibliography and the criminal justice system in early-modern France. The module's most recent cohort unanimously awarded the module maximum scores for being well-organised and running smoothly, the level of support offered, and their satisfaction with their experience on the module.