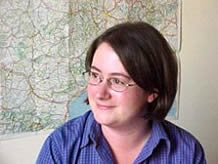 I am a sociolinguist working primarily on phonological variation and change in the French of France. My research interests and publications cover topics including regional and social varieties of spoken French and the interaction between these dimensions; the attrition of distinctive regional accent features owing to processes of levelling and standardisation; and perceptual and attitudinal approaches to the study of dialect differences.

My teaching interests draw on this work. With Aidan Coveney, I offer an undergraduate pathway of modules in French linguistics covering articulatory phonetics, the external history of the language, aspects of the internal history including historical phonology and etymology, and French dialectology, both geographical and social. In addition, I have taught practical French language classes at all levels, and currently contribute to our final-year core module by teaching Translation both from and into French.

Zoë Boughton welcomes enquiries about postgraduate supervision (for MRes, MPhil and PhD degrees) in areas relating to the sociolinguistics and dialectology of French, such as: phonological and phonetic variation and change; French regional accents and social varieties; dialect and accent levelling; standardisation, purism and language ideology; language attitudes and perceptual dialectology; folk linguistics.

I'm interested in all aspects of the linguistics, and particularly the sociolinguistics, of the French language, but my main area of research is variation and change in the pronunciation (phonetics and phonology) of metropolitan French. During my PhD, I gathered a large corpus (about 60 hours) of speech recordings by carrying out urban dialect surveys in the cities of Nancy and Rennes. The design of the corpus means that I can examine variation with regard to the major extra-linguistic variables of region, gender, age and social class. I'm especially interested in the apparent loss of traditional regional accents in France, whether this is owing to standardisation or levelling, whether uniformisation of speech is continuing and on what level, and how variation is expressed in contemporary French if regional features have been attenuated.

Perception, Salience and Connotations of Accents

The other main strand of my research is the investigation of ‘folk' (= non-linguists') perceptions of and attitudes towards language variation. This is important not least for the reason that speakers' beliefs and feelings about different varieties of a language can materially affect not only their own speech behaviour but potentially the direction of far-reaching linguistic changes. Most early language attitudes research in social psychology focused on hearers' attitudes towards speakers of certain types of language (for example, is a Brummie speaker friendly?; is a speaker of RP trustworthy?). More recently, the field of Perceptual Dialectology has sought answers to other questions, such as how many different varieties of a given language its native speakers believe to exist and where they think these are located geographically. My work on French has involved asking native speakers to listen to audio clips of other native speakers (from Nancy and Rennes) and say where they think they are from, what their socio-economic background might be, and so forth.

The two studies I have carried out so far have both been reported in the press. Here are links to articles in The Guardian and the Chicago Tribune.

A quantitative variationist analysis of word-final post-obstruent liquid deletion in my corpus (i.e. the dropping of /l/ and /R/ in words like table > tab' and quatre > quat') has revealed conclusively that this variable functions as a sociolinguistic marker in contemporary metropolitan French. I am now carrying out an investigation of the effects of following phonological context on the variant realised; that is, whether the token is followed by a word beginning with a vowel or a consonant, or a silent pause. My working hypothesis is that there is a particularly strong interaction between the following phonological context and the social class of the speaker.

I have previously published some results of a perceptual study carried out in the Pays de la Loire region. This reported on non-linguists' ability to identify the region of origin of a sample of speakers from Nancy and Rennes based on short audio extracts, and on their perceptions of these speakers as having a rural or an urban background. Further data yet to be analysed and published concern two more key aspects of this study: (i) the identification of the socio-economic background of the speakers and (ii) the hearers' evaluations of the aesthetic qualities of the speech samples.

I regularly teach modules in the linguistics of French, including a final-year module in Dialectology that both draws on and feeds into my research. I also have long experience in teaching Translation both from and into French at final-year level and have contributed to the teaching and supervision of MA students in Translation Studies.

I completed my BA Hons in French (first class), MA Linguistics and PhD in French at Newcastle University. My doctoral research focused on sociolinguistic variation in the phonology of metropolitan French. I was appointed Lecturer in French at Exeter in 2001, and Senior Lecturer in 2006. I have served in a variety of administrative and leadership roles over the years, including Programme Director in French, Deputy Director of Education in Modern Languages, and Chair of the Ethics Committee in the College of Humanities. Currently I am Assessment Officer for Languages, Cultures and Visual Studies, incorporating Art History & Visual Culture and the Language Centre. Beyond Exeter, I have acted as external examiner on BA French and Modern Languages programmes at Newcastle (2012-2016) and at Queen's University, Belfast (2008-2012), and have examined PhDs for QUB and the University of Melbourne. I am a past member of the editorial board of the Journal of French Language Studies (Cambridge University Press).