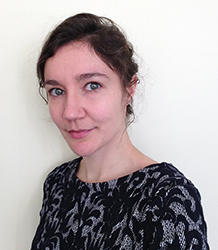 My research focuses on the intellectual and literary history of early modern France, particularly the seventeenth century. I am interested in cultures of learning, women's intellectual practice and its reception, classical reception, cultural quarrels and translation studies.

My first book, published with OUP in 2017, examines the reception of the life of the ancient Roman poet Ovid in 17th-century French culture. In May 2018, I embarked on a Leverhulme Early Career Fellowship to work on my second book, Women Writing Antiquity: Gender and Learning in Early Modern France (forthcoming with OUP).

I teach or have taught all years of undergraduate modules in French language, literature, and philosophy and currently contribute to the final-year cross-language module 'Green Matters in Modern Languages and Cultures'. I also teach for the MA in Translation Studies and the MA in Global Literatures and Cultures. I co-direct Exeter's Centre for Early Modern Studies and am a founding member of the new Centre for Classical Reception.

My research focuses on the intellectual and literary history of early modern France, particularly the seventeenth century. I am interested in cultures of learning, women's intellectual practice and its reception, classical reception, cultural quarrels and translation studies.

My publications reflect these areas of research. My first book, The Lives of Ovid in Seventeenth-Century French Culture (OUP, 2017), took a socio-literary and historicist approach to examine the uses of ancient culture in a range of genres and media at a time when the authority of antiquity was in contention.

My second book, funded by a Leverhulme Early Career Fellowship, Women Writing Antiquity: Gender and Learning in Early Modern France (forthcoming with OUP), examines women’s multi-genre responses to ancient texts to analyse the uses of antiquity in authorial self-fashioning and to explore the gendering of knowledge in this period and its historiography.

Related to these two projects, with Fiona Cox (Exeter), I am co-editing a comparative, cross-period volume, Ovid in French: Reception by Women from the Renaissance to the Present, for OUP's Classical Presences Series (2023).

I have also worked on women's engagements with literary 'quarrels' (querelles). I organised a panel at the MLA 2019 in Chicago and a conference at Exeter in March 2019 on this theme. I have published a number of articles on this topic, and with Kate Tunstall (Oxford), I guest-edited a Special Issue of Romanic Review on 'Women and Querelles in Early Modern France' (112.3, December 2021).

I am committed to interdisciplinary scholarship and collaboration: with colleagues in History and English, I co-direct Exeter's interdisciplinary Centre for Early Modern Studies; and I am also a founding member of Exeter's new Centre for Classical Reception and serve on its advisory board.

In addition to the above, I have recently been involved in a number of funded collaborative projects:

- In 2019 I was awarded funding from Exeter's European Network Fund to set up a project entitled 'Before Invisibility: Classical meets Vernacular in Early Modern Translation Studies' with Beatrijs Vanacker at KU Leuven in Belgium and  Freyja Cox Jensen and other colleagues across Humanities at Exeter. This led to two workshops in early summer 2021 and, thanks to further funding from Exeter's Institute for Cultural Enquiry,  a conference in Leuven in June 2022.

I am not currently taking on any more PhD students but am always happy to hear from final-year undergraduates or MA students interested in writing dissertations on early modern French culture (16th-18th centuries). For more information about the Department of Modern Languages' MA in Global Literatures and Cultures, see here.

I am the Treasurer and Membership secretary for the Society for Early Modern French Studies (SEMFS): get in touch if you'd like to join!

I am also on the editorial team for H-France Review, the online journal.

I came to Exeter in September 2015 as Lecturer in French Studies (E&R), having held a Laming Junior Research Fellowship at The Queen's College, Oxford. Prior to this, I completed my DPhil (2013), a Masters in European Literature (2008), and a BA in French and Classics at Oxford (2007). From 2010-11, I taught as a lectrice at Paris Sorbonne (Paris IV). I am a fellow of the Higher Education Academy.