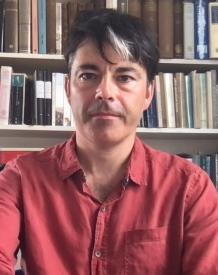 I started life - or academic life, anyway - as a classicist. When I went to Oxford in 1997, it was to study Greek and Latin (or Literae Humaniores, as they insisted on calling it). But I soon realised that what most excited me about ancient texts was the way they had been read and re-made in the modern world. So I switched to Classics and English. After a BA in Classics and English (2001) and an MSt in Greek and Latin Literature (2002), I went to Cambridge to write a PhD on the classical sources of Henry Fielding's great novel, Tom Jones.

Most of my work since then has been concerned with the reception of classical texts and ideas by English (or English-speaking) authors. I have a particular interest in English Literature of the seventeenth and eighteenth centuries, but I also write about (and teach) recent and contemporary literature; one recent research project is on the Homeric translations of Christopher Logue (1926-2011). You can read my essay on Logue here.

After leaving Cambridge in 2005 I was briefly a research fellow at the Institute of Greece, Rome, and the Classical Tradition at the University of Bristol. I was then awarded a Leverhulme Early Career Fellowship, which allowed me to spend time thinking about the reception of the Roman poet Virgil during the English Civil War. Since 2007 I have been teaching at the University of Exeter.

In 2015,  I published Epic into Novel, a book which looks at the way classical literature was consumed in the first half of the eighteenth-century, with a particular focus on Henry Fielding. Fielding remains a major focus of my research, and I have just been contracted to edit (with Professor Thomas Keymer) the Oxford Handbook of Henry Fielding.

In 2018/19 I was awarded a British Academy Mid-Career Fellowship, which enabled me to work on an edition of Joseph Addison's prose works. Addison is best known for writing periodicals such as the Tatler and the Spectator. This edition (contracted to Oxford University Press, and due to be published in 2023) will present a number lesser known works, in which Addison writes for a broad readership about the significance of classical art and literature.

My particular focus at the moment is the eighteenth-century poet and translator Alexander Pope. I am currently completing an edition of his works, to be published next year in the Oxford Twenty-First-Century Authors series, and also editing his translations from Homer for Oxford University Press.

In 2018 I was appointed to a personal chair. My inaugural lecture was on echoes of Homer in the works of Alexander Pope, John Keats, and Thom Gunn. It's available to read here. In the future I plan to write a more substantial study of the role Homeric translation and imitation has played in the development of English poetry.

I have held visiting positions at the Beinecke Library at Yale University, at PKU in Beijing, at the Huntington Library in California, and at All Souls College, Oxford.

Together with my colleague Dr Ika Willis, I organised the workshop ‘Stories of the Novel: Ancient and Modern Narrative Forms’ in 2008 at the University of Bristol.