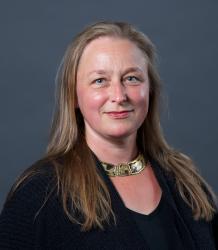 I joined the University of Exeter (German/Modern Languages) after working for the local government and a publishing house in 1990s Berlin/Germany. Berlin, its culture and its history, in particular during the interwar years, remains one of my main research interests. Other topics include the role of hotels, railway stations and department stores in the 19th and 20th centuries, metropolitan tourism and souvenirs (for example of the Berlin Wall).

Much of my teaching reflects these interests; I teach in all years of undergraduate studies, teach on a variety of MAs and have supervised PhD students.

I have a wide portfolio of administrative experience on University and Departmental level, most recently as Admissions Officer and Schools- and Widening Participation Coordinator for Modern Languages and Cultures.

My research interests include the culture and literature of twentieth-century Berlin with a particular focus on the interwar period and the 1990s. Aspects include the role of city myths, literary and autobiographical perceptions of the city, film and photography reflecting public spaces in periods of transition, topographical shifts within the cityscape and the interface between architecture, town-planning and literature. Publications also consider a variety of individual authors such as Bertolt Brecht, Kurt Tucholsky, Georg Hermann, Heinrich Mann, Joseph Roth, Mynona, Georg Hermann, and Peter Schneider, and particular themes, such as hotels, department stores, railway stations (so-called semi-public spaces) or the role of 'Heimat' in European literature.

More recent research interests include the cultural role of souvenirs - for example how the Berlin Wall has been turned into a consumer phenomena since 1989, how museum shops develop their own historical narratives or how nostalgia and souvenirs are closely linked together. Current projects consider the role of metropolitan tourism and, together with Chloe Paver, the touristic and commemorative pathways that dominate the modern city-scape.

Currently one co-supervision in Creative Writing.

All my modules are inspired by my research. This informs the lectures and the discussions in our seminars. MLG2018 (Berlin) and MLG3037 (Coping with Catastrophe), for example, reflect my long-term work on the German metropolis and the Interwar Years in particular. Other topics, such as the role of hotels, department stores and tourism, feed into the majority of the modules. SML3041 (Green Matters in Modern Languages and Cultures) is a team-taught module that focusses, based on expertise across Modern Languages, on topical environmental concerns and the Humanities' responses to such challenges.

My language teaching is informed by a combination of linguistic and intercultural skills.